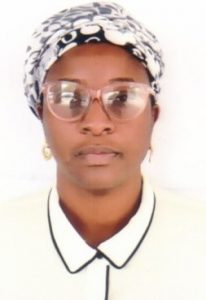 Mrs. Maimuna Lami Shiru (Deputy Director, Legal) hails from Kwara State. She graduated with a LLB (HONS) degree from the University of lbadan, Oyo State and was called to the Nigerian Bar. She has an LLM from the University of London (Queen Mary). She was employed as a Legal Officer lI in the Federal Ministry of Justice in 1999 and posted to serve as a Legal Adviser in the Ministry of Aviation in 2001 to 2010.

While in the Federal Ministry of Aviation, in addition to the general legal duties, she was aso involved in drafting and attending meetings in relation to Bilateral Air Service Agreements which exposed her to international relationships and duties. In 2010, she was posted back to the Civil Litigation and Public Law Department of the Federal Ministry of Justice and has, in addition to other duties, handled civil suits on behalf of the Federal Government; an assignment which she still handles till date.

She has been involved in several commercial arbitrations and has handled several cases on behalf of the Federal Government of Nigeria with 90% success. She has attended several training courses and conferences both localy and internationally. She has earned the following awards:

She is happily married with children.