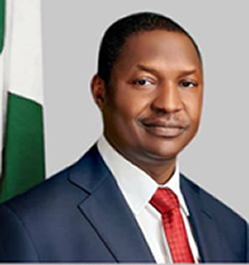 Mr. Malami had his primary school education at the Nassarawa Primary School, Birnin Kebbi, Kebbi State, and his secondary school education at the College of Arts and Arabic Studies, Sokoto. He proceeded to the prestigious Usmanu Dan Fodio University, Sokoto, Sokoto State in 1991 where he obtained his Bachelor of Law Degree with honours, following which he was called to the Nigerian Bar in 1992 having satisfactorily passed his Bar Examinations at the Nigerian Law School, Lagos.

His unflinching quest and thirst for knowledge coupled with his preparedness for public governance and affairs prompted him to pursue a Master’s Degree in Public Administration at the University of Maiduguri where he also came out in flying colours.

LEGAL CARRER AND ELEVATION AS SENIOR ADVOCATE OF NIGERIA

Upon his Call to the Nigerian Bar, Mr. Abubakar Malami did not waste any time in acquainting himself with the profession as was evidenced in the manners in which he was always engrossed in legal research with a view to rendering bespoke legal services to his clients, and other poor, needy and indigent Nigerians.

Prior to his appointment as Attorney General of the Federation and Minister of Justice, Mr. Abubakar Malami was a highly sought after and a go – to – lawyer due to his erudition, intellectual acumen, tact, dynamism, deep legal experience, advocacy and mastery of law, all of which he had demonstrated while handling diverse complex and complicated civil, criminal and commercial litigations.

He is an independent-minded, strong – willed and honest legal practitioner with decades of impressive track records in legal practice.

Due to his professionalism, sound knowledge of law, commitment to duty, good character, dedication and contribution to the profession, Mr. Abubakar Malami was conferred with the highly esteemed and coveted rank of the Senior Advocate of Nigeria (SAN) exactly sixteen years after his call to the Nigerian Bar.

NOTABLE ACHIEVEMENTS AS ATTORNEY GENERAL OF THE FEDERATION MINISTER OF JUSTICE

Mr. Abubakar Malami dedicated himself to the recovery of public stolen assets stashed in offshore jurisdictions by convening strategic and result-yielding bilateral and multilateral meetings and negotiations with different countries which nationalistic efforts culminated in the reparation/return of more than five hundred million United States Dollars in cash to the Federal Government of Nigeria.

His other positive efforts have also begun to yield positive results as Nigeria is in advanced stages of recovering about eight hundred million United States Dollars from Ireland, United States, Island of Jersey and other jurisdictions across the world.

Other notable achievements include:

A man of many parts, Mr. Malami once had a stint as a Teacher, and later as a Magistrate in the Kebbi State Judiciary. Due to his in – depth legal skills, critical thinking, emotional intelligence and thoroughness, he had acted and/or served as a legal strategist to a number of political parties in Nigeria especially the defunct Congress for Progressive Change (CPC) which political party he diligently served as National Legal Adviser.

Following the decision of like minds to merge Action Congress of Nigeria (ACN), All Nigeria’s Peoples Party and Congress for Progress Change, Mr. Malami played an active role in the activities and events leading to the conception, and eventual formation of the All Progressives Congress (APC) in 2013 during which he served in several Committees and served as a Resource Person to the Manifesto Drafting Sub -Committee of Inter Joint Party Merger Committees of the CPC, ACN and ANPP.

In 2014, Mr. Abubakar Malami contested for the Governorship ticket of the All Progressives Congress (APC) in Kebbi State but he later stepped-down from the race in the overall interest of his Party and the State. However, in recognition of his nationalism, patriotism and positive disposition to public service and legal erudition, President Muhammadu Buhari GCFR appointed him as the Attorney General of the Federation and Minister of Justice on November 11, 2015 at just 48 years old and was then the youngest member the Cabinet making him a member of Nigeria’s exclusive club of legal practitioners to become the Attorney-General of the Federation and Minister of Justice in Nigeria. He was the 23rd Attorney General of the Federation and Minister for Justice.